Is The Definition CE 04 The Future Of BMW Electric Two-Wheelers?

bikebmwmotorcycle
All future, all the time.

If you reach way back into your brain cavity, there’s a slim chance you might remember the BMW Motorrad Concept Link. BMW introduced it to the world at the Concorso d’Eleganza Villa d’Este 2017, in the before-times when big shows were a thing. It was an interesting design, but that’s all it was; an interesting design. The fact that it was a concept was proudly borne out in its name.

Fast-forward to November, 2020, and BMW just introduced the updated version, as part of its #NEXTGen 2020 multi-vehicle, multi-platform showcase. The Definition CE 04 is what BMW is calling a “near-series version” of the Concept Link—and as you can see, the strong design language featured in the concept has mostly come through to this iteration. This scoot might be electric, but it’s a far cry from the C Evolution.

It’s not so “near-series” that there are any true specs about it available just yet, but we do have a few more details than there were back in 2017. Let’s have a look, shall we?

The battery pack is flat, and located low down in the scooter to help lower its center of gravity. Likewise, as you’ll note in that Concept Link video from 2017, the storage compartment has been relocated lower down and further back than the traditional under-seat storage area of maxi-scooters. It’s like a secret sliding cubby back under where a passenger might sit.

Speaking of a passenger, take a look at that bench seat. BMW’s design team says they made it with all types of riders in mind, envisioning that it would be much easier for a short rider to clamber on from the back instead of in the usual way. Perhaps something was lost in translation, but while that might make sense for a passenger, it doesn’t seem particularly helpful for a short-legged rider.

The Definition CE 04 still has floorboards, like most maxi-scoots, and any rider will still need to put at least one foot down at stops. If a rider is so short that climbing on in the usual way is difficult, riding the scoot in general would be a major challenge. It may be many things, but self-balancing doesn’t appear to be one of them.

In any case, BMW doesn’t mention anything about the electric motor that powers it, although it does make vague pronouncements about it having very good range for urban commuters. In all its press materials for this vehicle, BMW seems to envision this scoot being a prime commuting vehicle for young creatives, zipping to meetings, lunch, dinner, bars, and generally enjoying all the elements of busy city life. It has a gigantic 10.25-inch digital display on the dash to help you stay connected while you’re on the move, as well.

There’s also a jacket that goes along with it, although that particular design doesn’t seem to have a name just yet. It’s a soft parka-style jacket, and it has a hood, is weatherproof, and is breathable. It also has soft armor—in other words, it sounds pretty well-specced for commuting. To make it extra-special, BMW installed light strips in the back and sleeves that light up when you grab one of your wrists around the jacket cuff. Retro-reflectivity is nice, but a self-illuminating jacket is one more tool to get you seen on the road when you’re riding at night.

At this point, there are still far more questions than answers, but presumably more information will be available closer to production and release. There’s no question the design will be divisive, but you can’t move forward by making the same thing over and over again.

One thing’s for sure, The Definition CE 04 fulfills BMW’s stated goal of wanting to make a maxi-scooter that’s different from all other maxi-scooters that have gone before it, including its own. The long, low profile puts me in mind very, very slightly of the overall line of the Yamaha Morphous—although it’s nowhere near as bubbly, and bears little actual physical resemblance to that scoot. 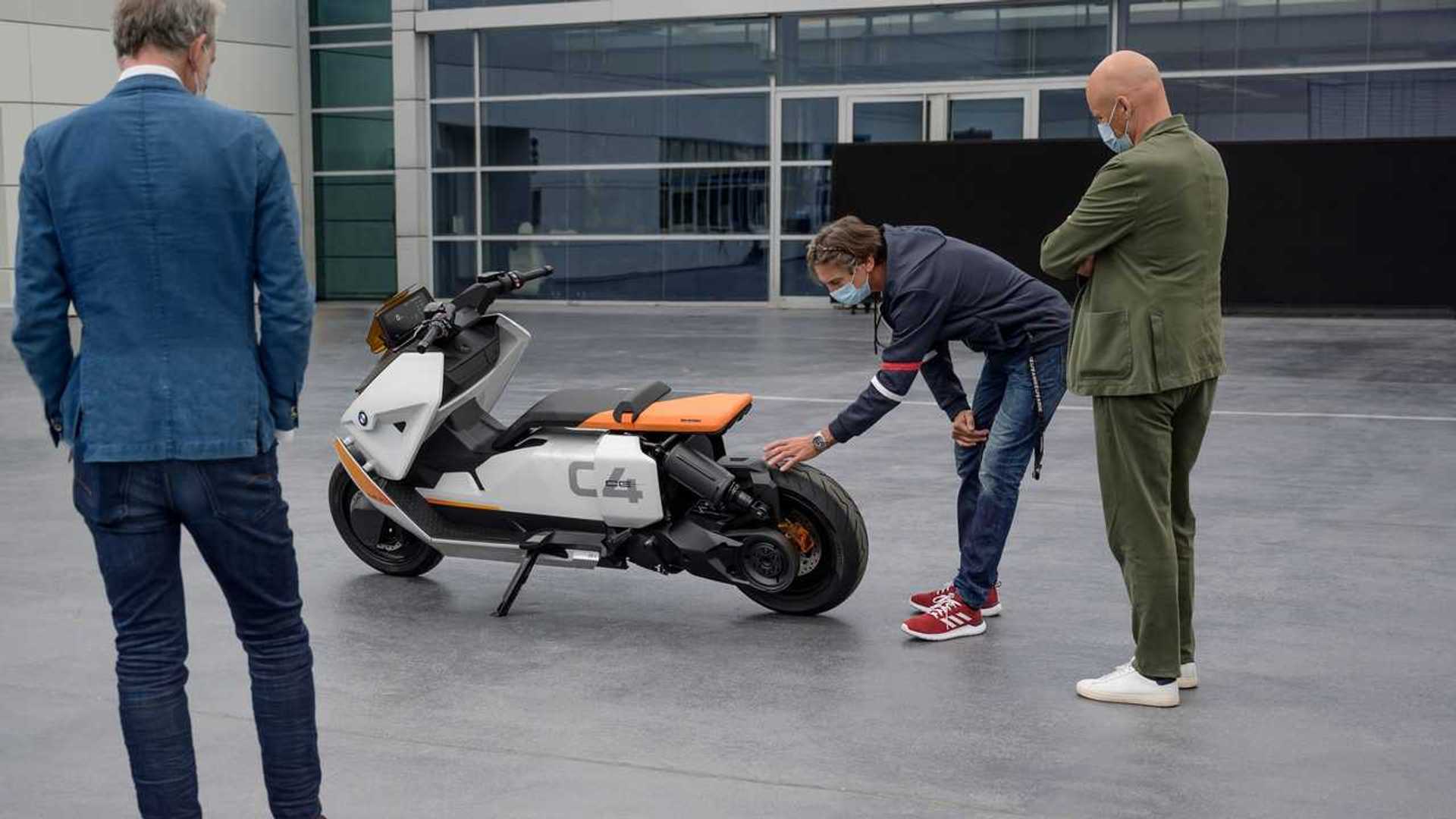